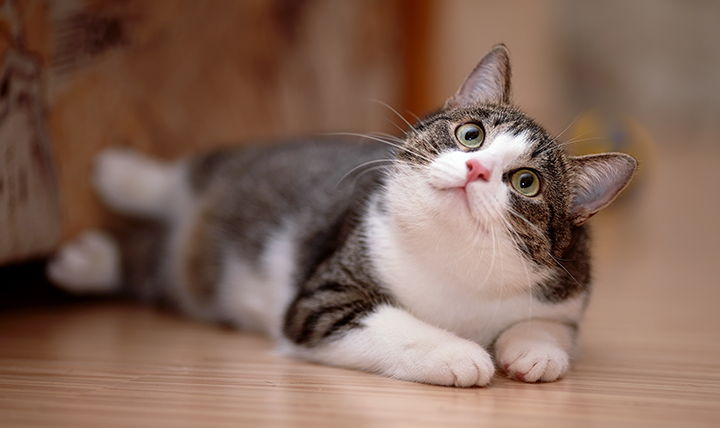 Cats are curious animals. But so are their humans. Here are answers to some of the most pressing questions in the feline world. Questions like…

Why does my cat lick me?

We all know a cat lick is halfway between a tongue bath and drying yourself with a towel made of sandpaper. Thankfully, a cat lick means they accept you as a family member and feel safe around you! In their minds, they’re keeping you clean and marking you as their own. They’re telling all the other cats that they have dibs. You’re theirs!

Why does my cat knock things off the table?

Part play, part curiosity, and part attention seeking. Sometimes your kitty just wants to explore an object and see how it moves (and how fast it falls). They also know there will be loud crash as it hits the floor, and that will draw your attention, good or bad.

Why does my cat rub its face on everything?

They are leaving their scent behind in an act called “bunting.” Sometimes they do it to announce to other cats of their presence in that space. Some even bunt when they are anxious, and the process makes them feel comfortable in an unfamiliar environment. And if you feel them doing it to you, it can be a sign of affection or just saying “Hello!”

Why does my cat put toys in the food bowl?

The food bowl is like home base, so some cats put toys in the food bowl so they can find them easily later on. Sometimes, they simply drop the toy in the bowl prior to eating and decide to leave it after they’ve finished. Cats may also think their toys, such as fake mice, are prey. And they’re simply mixing their hunted food with their prepared food!

Why does my cat hide when it’s sick?

It could be instincts that are telling them they are more vulnerable to predators when they’re sick, and that they should keep out of sight to survive. They could also want to be on their own in a dark and quiet place to sleep so they can recover faster, like many humans do when they’re sick. If you find that your cat is hiding away a lot, you should check him or her over as it could mean he or she is feeling under the weather.

Why does my cat hate water?

When a cat’s fur gets soaked, it’s like a wet towel: weighed down, and the kitty may not be able to move as quickly as usual. Since cats don’t like feeling helpless, wet fur could make them feel vulnerable.

Now that you’re a certified Cat Whisperer, it’s time to take your knowledge to the world. Use your powers for good, and inform your friends.